The project "In Between?" was completed in Berlin. Slovak participants contributed their own podcast

On 22–24 September, participants of the educational project In Between? – Neighbours Meet in the Borderlands gathered in Berlin. Focused on discovering the heritage of border areas, the annual programme is delivered by the European Network Remembrance and Solidarity (ENRS).

The meeting in Berlin offered a summary of the results of research conducted by an international group of university students in border regions of Germany, Poland, Slovakia and Ukraine in late August and early September 2021. The official presentation of the outcomes of their work and a debate on the podcasts they produced about the unique features of the regions visited took place at the seat of the Representation of the State of Brandenburg (Landesvertretung Brandenburg beim Bund).

The participants were welcomed by Dr Jutta Jahns-Böhm, Secretary of State and Representative of the State of Brandenburg at the Federal Government; Dr Vasco Kretschmann, a representative of the German War Graves Commission (Volksbund Deutsche Kriegsgräberfürsorge), Rafał Rogulski, Director of the ENRS, and Dr Annemarie Franke, the In Between? project coordinator. They thanked the co-organisers of this year's edition: Depot History Centre, Remembrance and Future Centre, the Slovak Nation's Memory Institute (ÚPN), Kreisau-Initiative and the German War Graves Commission (Volksbund Deutsche Kriegsgräberfürsorge), as well as the local partners: Borderlands Museum in Lubaczów, the Centre for Polish Culture and European Dialogue in Ivano-Frankivsk, the NGO Komunitná nadácia Bardejov, and Jugendbegegnungsstätte Golm. Special thanks were received by the EVZ Foundation, which co-funded the project as part of the Europeans for Peace programme. The discussion was attended by the following experts: Hanna Radziejowska, Director of the Pilecki Institute in Berlin, Dr Mateusz Hartwich, a historian and publicist specialising in Polish-German relations and Tibor Macak, an RTVS radio and television correspondent from Bratislava.

In this years' (sixth) edition of In Between?, the project participants took part in workshops in photography, podcast production and research using the oral history method. In the first weeks of September, the students set off for study visits in German-Polish, Polish-Slovak and Polish-Ukrainian border areas, where they interviewed members of the local communities and made four podcasts, made available on Spotify and Simplecast.

Together in between is a podcast by the German-Polish group recorded in Ahlbeck, Kamminke and Świnoujście on the Island of Uznam/Usedom focusing on the challenges related to tourism developing in the region. Although the beaches of Uznam/Usedom are not divided by barbed wire anymore and the German and Polish seaside resorts are now linked by a promenade running for many kilometres, the borders continue to reside in people's mentality. The podcast authors ask the interviewees on both sides of the border why it is so and how to change it. Together in between paints a picture of the borderland as a living region: on a daily basis, its residents overcome institutional and communication barriers, much more tangible than the notion of border itself.

Who, if not us is a podcast created in the Polish and Slovak Carpathians. The main characters featuring in the recording are persons whose mission is the protection of the region's heritage as well as the identity of its inhabitants. It starts with statements made by activists saving the memory of Jewish communities of Bardejov (Slovakia) and Biecz (Poland) from oblivion. Their members perished in concentration camps during the Second World War or emigrated, and the buildings they left behind lay in ruins. In the second part of the podcast, the listeners become acquainted with the leader of the Ruthenian village of Osadne and women singing in the Lemko musical act Ruty Uwite, who talk about the challenges faced by ethnic minorities in today's world.

Lost mosaic of the borderland is a podcast created during a study visit to Lubaczów County on the Polish-Ukrainian border, a nostalgic story about the presence of the absent. Prior to 1939, the region was inhabited by a multi-coloured mosaic of population comprising Jews, Germans, Poles and Ukrainians. Due to the Holocaust and mass expulsions following the border changes, in the second half of the 1940s only those declaring Polish nationality remained in Lubaczów and its vicinity. Listening to the accounts of the interviewees who describe the peaceful life in the towns and villages of Roztocze before the war, one can tangibly sense that the memory of the armed conflict that broke out between Poles and Ukrainians in the years 1943–45 is still strong.

Borders at a crossing is the outcome of research done by a team collecting material on the Ukrainian side of the border area. The project participants visited Verkhovyna and Ivano-Frankivsk situated in former Galicia and now on the intersection of borders between Romania, Hungary, Slovakia and Poland. In the part devoted to Verkhovyna, the students interviewed Hutsul activists fighting for the preservation of the language and traditions of their community and talking about a special place the mountains have in their consciousness. The material recorded in Ivano-Frankivsk focuses on the multi-ethnic origins of the city. Representatives of Jewish, Polish, Hungarian and Armenian minorities remaining in Ukraine answer questions concerning the region's past, present and future.

During the discussion concluding the presentations, the project participants and experts shared their reflections on what surprised, irritated and fascinated them in the podcasts. Mateusz Hartwich emphasised that Together in between confirmed his own observations as to grassroot solutions being more important than institutional ones. He also used an example from the podcast appealing for building bridges rather than turning them into symbols. Tibor Macak's comments on Who, if not us related to the process of confronting the past which took place in Slovakia after 1989. Jews who were coming to the country in order to recover their lost property made Slovaks aware that the abandoned and dilapidated buildings used to belong to a community that had lived there for centuries yet was obliterated in collective memory. For her part, Hanna Radziejowska referred to the tension tangible in the podcasts titled Lost mosaic of the borderland and Borders at a crossing. The reason for it might be the absence of possibilities to hold free dialogue with the neighbours in the Polish-Ukrainian border region. While the open borders on the island of Uznam/Usedom and in the Carpathians facilitate daily contacts, building neighbourly relations and integration, the Polish-Ukrainian and at the same time European Union border condemns the local population to isolation and living in the past.

The project In Between? – Neighbours Meet in the Borderlands marks a step towards overcoming barriers and establishing dialogue based on actual mutual contacts, both in the Polish-Ukrainian context and that of the other regions. Thanks to the work done in teams comprising representatives of two nations, the participants could learn about the local history of the border areas from two different perspectives and develop forms of expression taking into account the viewpoint of both sides. As a result, the podcasts made that way are not just an attempt at presenting reality and specific aspects of life of neighbours living on state borders but also the outcome of a consensus reached by their authors. 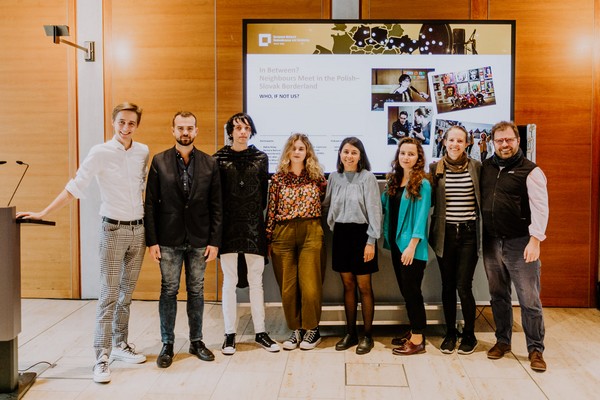 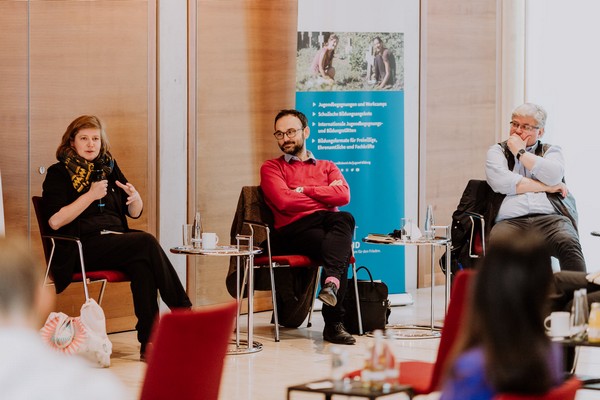 One of the judges of the project was also Slovak journalist Tibor Macák. 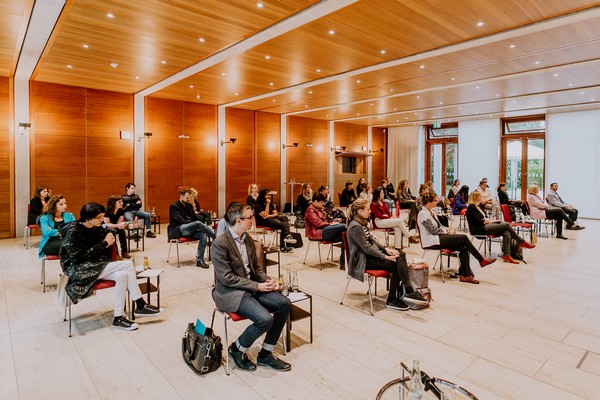 Project participants during the final conference.