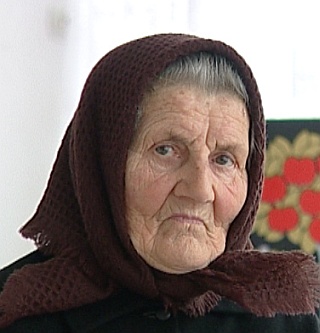 “We thought we wouldn’t get away with it.”

Margita Červenková was born in September 1926 in the village of Černík. She grew up in a large family of a small peasant, so farming could meet only the basic needs of the household. In the year 1938, when she was only a little girl, she witnessed the arrival of Hungarian troops in his native village. As Hungarian became the new official language, schools introduced its compulsory teaching. However, Margita doesn’t remember the use of the Hungarian language in religious life, because holy masses were still celebrated in the Slovak language. After Hungary had annexed a part of Slovakia, the economic situation in the ceded areas of Slovakia got worse and it also affected Margita’s family. Difficult living conditions forced Margita’s parents as well as many other people from the annexed areas to improve their situation by smuggling various necessary things from Slovakia. Despite all the difficulties, the biggest blow came at the beginning of 1944, when her father refused to enlist in the Hungarian army. His shelter in a nearby vineyard was soon discovered by the Hungarian soldiers and in subsequent gunfire he was severely injured and left lying on the snow bleeding for several hours. Later, he was driven to the village by the local farmers and then to the field hospital in Šurany. Margita visited him there and found him in a bad condition, lying on the floor. When she came to see him on the fourth day, she found him dead in an empty hospital; moreover, he was robbed of everything he had, including his clothes. All these blows left scars on Margita and influenced her attitude to Hungarian nation in general. Even many years later, she still saw it as unfairness.

The Life Then Was Like This (data format Flash Video)

“They rented a small piece of land and planted some maize and beans there and it was our living. We used to plant potatoes and other crops. It was just enough for us, because the life then was like this. It wasn’t like these days. Now people are employed and have money. Back then, we didn’t have much, also the Christmas presents were quite poor. We didn’t have much money, because we had nothing to sell.”

„“Do you remember when the Hungarian troops arrived in the village?”
“I only remember when those Hungarian soldiers went through the village with feathers and we admired them, but Božena’s mother thought they could start shooting, so we were closed behind the fence. We weren’t allowed to be there. You know, we didn’t feel like in our homeland. We were forcibly annexed.”

“They taught us word by word. We had to shout Hungarian words which they told us and count from one to ten and the like. They taught us single words, not the whole sentences. Actually only short words.”
“And have you learnt Hungarian language?”
“I only lived there. Nothing else. It was impossible, how could I learn it? I only knew what I needed.”

“Did you use to go to Slovakia? I know people used to smuggle various things through the borders.”
“Well, people did it, because we could buy nothing here, we had nothing, so once my father went with our aunt Hana Tuhačková, she was very clever. And once also my mum went. I know that they got lost somewhere near the border where the guards chased after them and they had to spent night in some gutters. Only when they saw the sunlight, they moved. The border was then near the village of Kýr. My father went there, so he bought some butter or something like that and tried to sell it. Then, they could buy some clothes for us. However, we were so many children that it even wasn’t enough.”

“In February somebody came, actually it was our uncle Jožo, and he told us that they will search for the men at night. And they were in hiding, of course, they went to grove as they thought nobody else would go there. We had already done a leaven for bread, because as our father had to go to his hiding, mom prepared some food for him, because he never knew how long he would be away. And he really regretted that he couldn’t stay with us, ‘I’d like to sleep at home.’ And when he was leaving, he angrily threw his bag and he inadvertently hit the flour. It was scattered about the room and then my father left for those vineyards. My father had reaped for a peasant, who also owned a vineyard. So then my father asked the peasant for a key, because as it was snowing, it would be much better for him to stay in a house in his vineyard. Once when I visited him there, you know I brought some food to him, he told me that they even could make fire, so it was pretty warm there. However, that night they didn’t go there, only in the morning. The soldiers saw smoke pouring out of the chimney. They knocked, knocked, there were many of them. They knocked on the door, but nobody opened. Nevertheless those soldiers or policemen knew somebody lived there as they saw the smoke. Then the soldiers left and hide somewhere. They waited until those men went out from the house and started running down the grove. And soldiers released the fire from their hideaways. My father was shot in the lungs and in the collar bone. It was about half past eight. They left him there and took him from those vineyards at about half past one. They left him lying on the snow. He had such blue scarf and they wrapped him into it somehow. They left the house and ran down. They probably wanted to flee from the soldiers. However, they started firing and shot him in the lungs and in the collar bone. They left him there and dressed his wounds with that scarf, but they had no wagon. Later in the afternoon a man from Malá Maňa went to cart wood with a horse and he was forced to take my father down to the village. They passed our house, we lived on the way to Vinodol, there is a surgery now, doctors, and they went past our house at about half past one. However, they didn’t stop in front of our house; they stopped in front of our neighbour’s house. My father turned round and thought he would stay at home. However, they didn’t let him stay at home; the carter took him down to the cemetery. They left him in a yard next to the cemetery. They probably thought he would die and they would bury him somewhere there. Why didn’t they leave him at home? They went past our house.”

He Was Not the Only Victim

He Was Not the Only Victim (data format Flash Video)

“Your father was not the only victim here in Černík. There were more people shot dead, weren’t there?”
“There were two men shot dead in Malá Maňa, in the brickfield. When I went home I saw them carrying those corpses on a wagon and brains were falling down from the wounds in their heads.”

Cause of Her Father’s Death

Cause of Her Father’s Death (data format Flash Video)

“Why was your father shot dead?”
“I don’t know if the Hungarians did it, but he hadn’t joined up, he wasn’t at the front in Russia. However, my mother’s brother had to enlist and then my father said, ‘Oh, Karol cried so much that I would go instead of him.’ And they did it to him, because he didn’t enlist.”