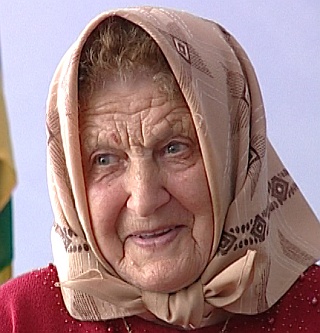 “Back then everyone had to work and obey.”

Anna Matiová was born on May 4, 1924 in Čaňa into a workman’s family. She grew up in modest conditions and her parents could hardly find a job during the crisis. Due to want of money Anna couldn’t pursue her studies. In 1938, when their lives were affected by the Vienna Award and Hungary’s annexation of southern Slovakia, Anna was just finishing the compulsory education. Then she continued at a two-year school of economics. Anna as a young girl was not interested in public affairs at all, but she still remembers an arrival of Hungarian soldiers in her native village and ban on using the Slovak language during holy masses. Want of money forced Anna to go into service; she started working as a house girl in a Jewish family in Košice. However, the family was deported in 1944 and she saw them never again. Anna returned to his native village, where she experienced the dramatic moments of liberation as well as the end of the war. Čaňa and the rest of the territory was ceded back to Czechoslovakia after the war, therefore a lot residents of Hungarian nationality left the village. Anna got married and started a family, but she had to solve problems of a lack of job opportunities repeatedly. After many years of working for the collective farm, she found a job as a cook; however, she decided to return to the collective farm later. As a mother of seven children she retired at the age of 53.

“I’ll tell you the truth, when we were children we weren’t interested in it at all. I was fourteen, when I finished school and we only heard that the Hungarians were about to come, so we went there, where was such a gate near the playground. And the two men came, one was Maďar and another one was Bito, and they were riding horses. They we wearing such clothes and people welcomed them with salt and bread and shouted, ‘Esküszünk, esküszünk, hogy rabok tovább, nem leszünk! Esküszünk, esküszünk, hogy hogy rabok tovább, nem leszünk!’ And in our language?”
“We swear.”
“‘We swear we won’t be slaves anymore.’ Well it was like that. They came from there, from Trstená village, they came with a flag, with the Catholic flag with the Virgin Mary, and as they were welcomed here, they went to the Catholic church. They entered it and started praying and singing in Hungarian.”

“We were forbidden to sing in Slovak.”

“We were forbidden to sing in Slovak.” (data format Flash Video)

“They wanted to have an order. So in the church, you know, when we go to the church for a mass, it was celebrated neither in Hungarian nor in Slovak, but in Latin. And immediately after we had sung in Slovak, we were forbidden to do so, even though we were allowed to sing in Hungarian. If somebody could sing in Hungarian, they did so, but those who couldn’t, didn’t sing at all. And among the Catholics there were not many people speaking Hungarian. Among the Calvinists there were more people speaking Hungarian, therefore their situation was also much better.”

“Well, after their arrival, of course, the life was not that bad, actually we fared quite well during the first two years and even though we hadn’t much money, everything was cheap and it got better after they had come. Later, as I remember, everything changed. I finished school and then I went to the town to find a job. Because otherwise we had no money, we went for work. Just like nowadays people go for work to foreign countries, we went to the town, we served as housemaids there.”

“Because the Russians came. The Russians came first, and I remember I would also have been shot dead since some Russians came up to our funduš (building site), where we already lived. At that time I cooked steamed buns, I remember it like it was today. And they asked us for something to eat, so I gave them those buns. As the Russian bit to the bun, jam ran out of it suddenly and he was so surprised that he took a gun and wanted to shoot us. He thought we put something there. Fortunately there were some older guys, who calmed him down somehow and told him that he didn’t have to be afraid, that we really didn’t want to poison him or something like that. He would have shot us there, so I say we still have to learn.”

“When I came to Geča, nearby the church there used to be a big bridge and then it had been dynamited, it was called Ždaňský bridge. Well, Ždaňský bridge had been blasted off, and when I was at home, the small bridge near Malá Čaňa was dynamited as well and it was such a large concrete bridge. I recall that even pictures dropped down of the wall, so close it was, because we lived really near. I had such experiences after the Russians’ arrival.”