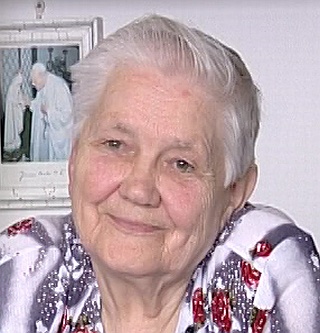 “I think I managed to accomplish my mission.”

Mária Slodičáková was born on October 20, 1933 in the village of Ľubica in Kežmarok district. She lost her mother when she was only a child and her father got married again shortly afterwards. They both treated Mária very unkindly, sometimes even cruelly; however, her father died in a tragic accident in 1946. Mária liked children very much, so she always yearned to be a teacher. After finishing the secondary school for girls in Kežmarok, she started to work for the building administration of the state property in Veľká Lomnica, where she only did paperwork. Later, the decision to make copies of the poem Svet by Gorazd Zvonický to the Pope Pius XII influenced the whole her life. Mária was sent to work in a plant in Svit, where she developed asthma as there was a dusty environment. Then, she went to Košice, where she became a paediatric nurse. Half a year later, she started working at the paediatric clinic, actually at the neonatal ward, where she witnessed many deaths of children shortly after birth. Another blow came, when she found out that she had a malignant disease, due to which she underwent a treatment in Hágy. After her (as she claims) miraculous recovery, she continued working as a paediatric nurse, but she arrived at a decision to devote her life to God. She professed the perpetual solemn vows in 1968. However, she never gave up working with children as they were her life. She tried to help them and to pass her faith to them. However, the State Security took notice of her activities, so she had to undergo many interrogations. In the 1990s she continued working with children in Komárno and in 2000 returned to Košice. Despite serious health problems Mária lives through the afternoon of her life with a great optimism. She has always worked and helped people, who really needed it, especially children, and it still makes her feel happy and satisfied.

“So I rewrite it and soon I was invited to Levoča to the regional court for interrogation. Somebody had already been there. I came and I was said, ‘You wrote the poem!’ So I responded, ‘No, Gorazd Zvonický did so.’ ‘No, you wrote it. However, we have a suggestion for you. If you write a poem in honour of Stalin’s fiftieth birthday, we will forgive you.’ Well, I thought, if they only wanted this, I would do it. I would put three socialist poems together and I would have one for Stalin. I really did so and I brought it to them. They said, ‘Well, now you have shown us that you really wrote it, so you will be sent to work in a plant.’ I was sent to Svit and there was so much dust that I even couldn’t see the neighbouring machine. It was such dusty environment that I developed asthma there. I earned so little that I barely had enough to eat. I usually had some tea and stale bread. It was unbearable and it took a year.”

Under the Supervision of the State Security

Under the Supervision of the State Security (data format Flash Video)

“I remember that once I came home after I had temporarily worked somewhere and I had no place to stay. Nuns were afraid of having me there, because the State Security often called me for interrogations and it was very bad. I couldn’t go there as I didn’t want to show them where I belong. Then, one night I stayed in one friend’s room, and the next night in another ones’. I spent the whole day sitting in the house. ‘Oh, Lord, what else? Tell me what I should do. Have you already written me off?’ And it went this way for years. However, the Lord was smiling at me, I know it today. He was saying, ‘Are you stupid? You fares best when you are with me.’”